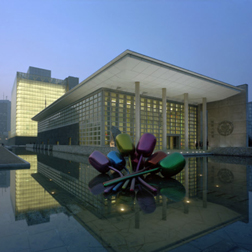 Given the complex forces connecting China and the United States, the new U.S. Embassy in Beijing, designed by Skidmore, Owings & Merrill's San Francisco office, had to negotiate difficult political, cultural, and architectural terrain. The design needed to take into account strict security concerns while accommodating the offices, spaces for visa processing, conferences, receptions, and community outreach that define an embassy program. At the same time, it had to refer to both American and Chinese precedents, providing a secure, yet welcoming image of the United States.

David Inlow S.E. gratefully acknowledges the engineer of record and fellow staff for their collaborative contributions to this project.
﻿